Brotherhood of the Moon

You are building a character for a long term campaign. Each new character for a player will have a detailed background, and as a player you have entire freedom about how you role play and develop your character, using or ignoring your background.

Please note that as a DM I do not “drop” new characters to meet the existing groups without any reasonable context for that meet. As such I may set up some requirements for new characters based on where the group is currently located to facilitate the conditions of the “Meet”.

Main choices for your character

All the races, backgrounds, spells, and specialization choices available from these official sources are accepted: PHB, Sword Coast’s Campaign Guide, and Xanathar’s Guide to Everything.

The warlock class is available as a multi class option (i.e. your first level class can’t be warlock). Check this page for details on Warlocks.

Restricted races
Tieflings are available, but to become one you need to chose your race as either human, half-elf or half-orc.
Evil tieflings are fiends in this campaign.

The Dragonborn race is not available in this campaign.

If needed, a deity can be chosen from the Forgotten Realms deities list
Deities must fit within the campaign background of D&D 5th edition.

Rolls must be done in Discord, in your private character channel that will be created after you join our Discord.

If you have a valid roll, but any of your results are 7 or under, you may reroll all the results of 7 or under once, and must keep the latest results.

Then if you have a valid roll, but at least three of your results are 10 or under, you may reroll all the results of 10 or under once, and must keep the latest results.

last, if the final result of the rolls is only one 16, or no results above 15, you can update one of the highest result to 17, and reduce your lowest score by -2.

Then assign one of your last 6 rolls to each attribute.

You can do the rolls once you are connected even if the DM is not present, as the results will persist in the chat after you disconnect, and can be easily verified.

Create your character sheet in DnD Beyond

You have or will receive a link to the DnD Beyond campaign page.

All character sheet are made in DnD Beyond as we use a bot for Discord that takes information from there. Furthermore, this is the central character sheet place that players can easily update online. 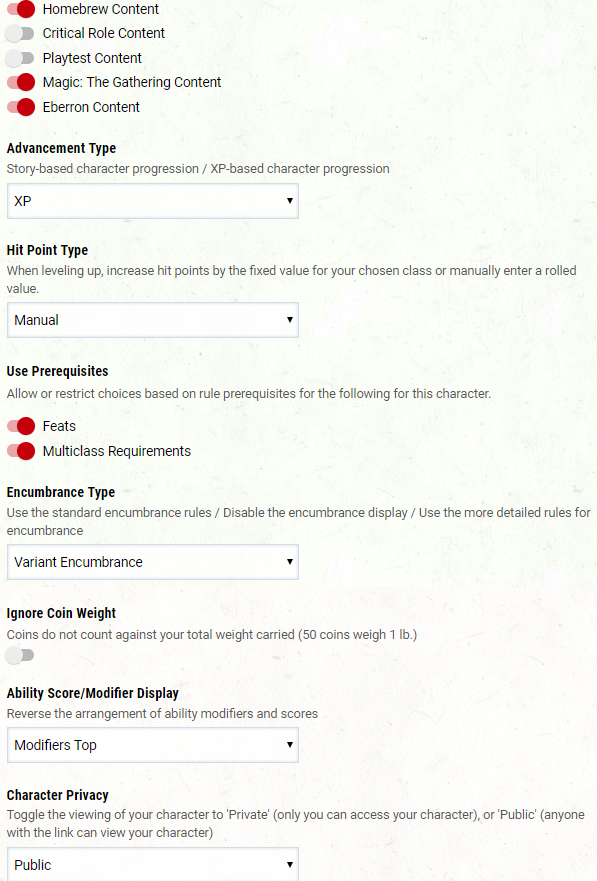 Please write down the background you have in mind for your character in DnD Beyond. You can go as far as you want, but I reserve the change your background to make it fit within my campaign. I prefer to have my players create their background without pre-conception about the campaign (except for what you can already read here), and I will do my best to then use what has been written as best as I can.

Regarding traits, flaws, bonds and Ideals, chose one of them for each category according to the background you have selected (only one choice per category). You do not have to roll them randomly. Your character will keep two of those, and as a DM, I may replace up to two of those with other results from the same table.
These choices will help inspire your character’s background, and roleplaying those traits in-game can grant Inspiration points.
If you chose an ideal related to an alignment, you will get a +1 bonus to Alignment Shift rolls toward this alignment.

I may modify your starting choice of languages based on the details of your final backstory. Note that this campaign allows learning new tool proficiency and language with downtime activities.

All characters start with the starting equipment choices (do not use Gold, chose the equipment selections from both background and class).

I am a world story DM, which means that for this campaign, I see my job as building the story of the Forgotten Realms beyond 1489DR with its canon and rich history as a backdrop to that effect (anything officially published post 1488DR not being considered canon for this campaign).

In turn, each player is responsible for building the legends of their character by their choices of actions within the game, and the active participation to our online game sessions and off-line Discord server.

I require from my players that they don’t miss an online game session twice in a row, and that they log in on our Discord server to provide input about their character’s actions at least once a day, so as to not restrict our common ability to move the game forward, and let us know if you are going to be offline for a while.

I will challenge players that can’t keep up this minimal activity status, as I prefer to have active and engaged players in my group.

Within the respect of the D&D 5th Edition rules as written (RAW), I am not going to guide players’ actions toward a preset objective. The interpretation of the rules is strict, and any home rules are documented in the campaign’s wiki, for all to consult at any time. As a DM, I will always confront the players’ actions to the rules we are using in the most impartial way I can. Both players and NPCs are bound by the same rules, the rules of the game we play.

Random encounters, and combat encounters, are tailored upfront for a group of 4 to 5 player characters, within the appropriate tier. Once setup, such encounter is not going to be watered down, even if the players decide to spit their forces. Once an encounter is triggered, tactical decisions and dice results will be the only thing between victory and defeat, as I will be merely an adjudicator of the rules. NPCs will be handled based on their level of intelligence and social cohesion in line with their story.

I believe accomplishments are worthless if they occur no matter what, by the grace of some unknown influence helping the players fulfill a preset destiny or outcome. World events are built far in advance from the timeline the characters are going through. I have a pre-determined vision for world events happening within the next two years in game time, and as the time in-game progresses, these events may or may not end up being altered by the actions of the characters.

I do not shy away from managing a split party for a few sessions, across multiple story arcs.

The XP sharing and class training rules are the only part of the rules that are arbitrary, and exists for providing the time for events to develop. These rules will apply no matter where the player’s characters are, as long as they remain part of the same player’s group. The group and all its characters gain experience as a whole, even if they are split in-game, so any experience earned by one character will be split evenly with the characters in the party. This is not logical, and I acknowledge that, but this is the a way to keep a coherent progression across what could be multiple story lines at time.

When a character dies, the player can create a new character that will start at level 5 (unless the level of the group is still under level 5) and will be introduced to the group at the next best opportunity.
If the group suffers a TPK (Total Party Kill), all the new characters for that group will start back from level 1.

I follow RAW as much as possible, and when RAW needs to be expanded or clarified to fit my simulation taste better, these rules will be documented in the campaign’s wiki. I am totally open to discuss rules, and their interpretations, and use extensively resources like the Sage Advice, erratas or the official communication channels of the designers. The rules specific to this campaign are all documented here.

I ask in exchange from my players to not hesitate to request clarifications and not take shortcuts in their action descriptions. A round is clearly defined, spells effect and usage are clearly defined. I will do my best to be clear with my descriptions, as one of the thing I want to avoid the most is for my players to make consequential decisions, in or out of combat, based on badly understood descriptions. So do not hesitate to ask me to repeat or confirm the vision you have in your own “theater of the mind”.

Have fun with the challenges ahead of you!

Last, but not least, what the existing players in this group are looking for matters. If they have been playing for more than three months, each player has a veto right on new character’s class (each player has one class veto-vote to that effect), that participates to the class restrictions listed above.

Ultimately, a new character introduction will be done via a “meet” in-game between the characters, when the situation of the group allows. Background will be crafted to provide a reason in-game for the characters to meet and possibly hang around each others, but the acceptance within the group will always be decided by the characters themselves.

by: Grisix
See All Pages

I'm sorry, but we no longer support this web browser. Please upgrade your browser or install Chrome or Firefox to enjoy the full functionality of this site.