Brotherhood of the Moon

The Brotherhood of the Moon 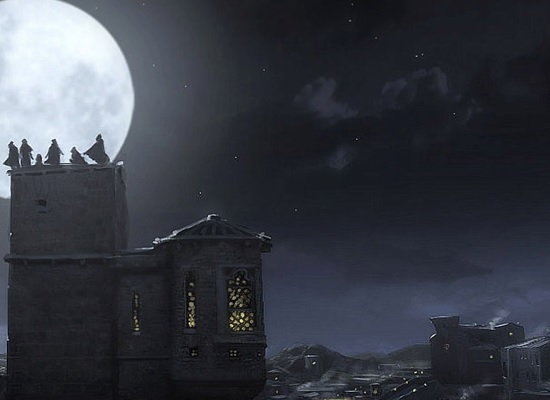 Before the Spellplague, more than one century ago, a company of adventurers protected the eastern parts of Luruar, and the town of Deadsnows, the last civilized settlement East of the Sword Coast before reaching the wild and dangerous expenses of the Anauroch desert.

Deadsnows was nestled at the feet of the Nether mountains and located only a few dozen miles from the Rauvin mountains. The adventurers of the Brotherhood of the Moon helped keep at bay the marauding tribes and fend off threats from the undeads of the Vorlorn Forest. They gained in reputation with their deeds and accumulated a massive wealth, especially when gold was discovered in the region in the 14th century of the 4th Age and a massive influx of prospectors and miners flocked to the region during the decades preceding the Spellplague.

Nobody knew who the adventurers from the Brotherhood of the Moon were, as they always appeared wearing a pure white mask in public, but they were fierce warriors and spell casters. It is said they lived anonymously among the population they protected, up until the year where the Spellplague hit, around 1380DR. The region of Deadsnows was hit particularly hard by the massive storms of blue fire, and the town itself got destroyed entirely in one terrible night. With no forewarning, all the townsfolks, and the ruling Icespear family was wiped out and everyone perished, including the heroes of the Brotherhood of the Moon, as they were never heard from again. The treasures accumulated by the Brotherhood of the Moon was lost, and to this day, many treasure hunters have scoured the ruins of Deadsnows in the hope of finding the fabled treasure.

Years later, under the influence of a halfling named Devlon Icespear, the town of Deadsnows got rebuilt around the dwarven abbey of Marthammor, a dwarf-made fortress dedicated to Marthammor Duin, the dwarven god of wanderers, a few miles from the ruins of the old town. Devlon had made a fortune in the gold mining a few decades ago, and as the effects of the Spellplague disappeared, he financed the work to rebuild Deadsnows and convinced the dwarves to put their skills unto it. The town was rebuilt on the hill on top of which the abbey was still standing. Deadsnows became mostly a halfling town, with an important dwarven population and a transient human population of prospectors, hunters and trappers coming in the area to spend the summer season in the wilderness, hoping to strike it rich again, like so many did before the spellplague, and wintering in Deadsnows before heading out again.

After the Darkening and the destruction of Sundabar, the dwarves have abandoned the place, left the town and have not been seen for the past two years. The trade that used the fork road between the local dwarven citadels, Citadel Adbar in the East, Sundabar in the West and Citadel Felbarr in the North West has completely stopped, slowing the activity in the town significantly. The closest village of Newfort was destroyed by Fire Giants at the end of 1388DR, sending surviving refugees to Deadsnows and making Deadsnows even more isolated than it had become since the destruction of Sundabar. The main trade link to the Silver Marches remain to this day the the barge traffic that the Icespears family maintain between their trading posts and the city of Everlund, down the Rauvin river. Since the death of Devlon Icespear during the first year of the Darkening, the Icespear family never agreed upon a successor and the town has been run by a fragile balance of familial alliances within the extended Icespear family.

Deadsnows is a town that is slowly dying, and the legends of the Brotherhood of the Moon are no more than a children’s tale that is still firing up the minds of its inhabitants.

I'm sorry, but we no longer support this web browser. Please upgrade your browser or install Chrome or Firefox to enjoy the full functionality of this site.